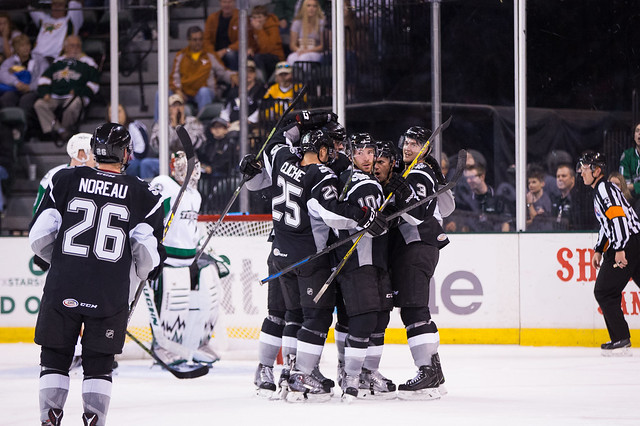 Rampage fans may not have known what to expect when this all new version of the silver and black to the ice Saturday night in the season opener against the Texas Stars. Over the course of 60 minutes, we still don’t quite know what to expect; but it appears the end result will be the same as it always has been. At least in Cedar Park.

The Rampage took a 2-0 lead into the locker room after 20 minutes, getting an early tally from Andrew Agozzino and a power play blast from the point by defenseman, Maxim Noreau. The road team dictated play for much of the period, but several Texas miscues kept the home team off the scoreboard as Calvin Pickard stopped all seven shots in the period.

The Stars came out in the second period with a ton of energy and capitalized early. Greg Rallo stripped Mat Clark of the puck behind the Rampage net and Curtis McKenzie slid the loose puck to Radek Faksa alone in the slot who easily beat Pickard to pull the Stars to within a goal just 25 seconds in.

The Stars maintained their push for most of the period, but a late pair of penalties would give the Rampage a 48 second 5 on 3 power play and they again cashed in with a power play goal, their second of the night. After half a minute of offensive zone possession, Dennis Everberg found a loose puck near the crease and beat John Muse to give the two goal lead back to the Rampage.

Then, the third period struck. Texas dominated play and capitalized scoring 3 goals in 6:24, the first two coming from Brendan Ranford. Sloppy play in the neutral zone and several mistakes in their defensive zone contributed to the collapse and Calvin Pickard was often left on an island with the shooter.

The Rampage would not go away quietly; however, as a late tip-in goal from Ben Street tied the game at 4-4 with just over a minute left to play. After a Devin Shore tripping penalty with 51 seconds left, the Rampage had a chance to take the lead, but somehow the puck was kept out of the Stars goal and regulation ended with both teams picking up a point.

In overtime, the Rampage never really threatened despite the man advantage and shortly after escaping the penalty box, Shore would make a terrific play on a Stephen Johns flip pass from deep in his own end, race into the Rampage zone and beat Pickard with a nifty deke, sending all but a handful of the 5,913 in attendance home happy.

-Pickard stopped 23 of 28 shots, taking the loss and the Rampage finished 2/5 on the power play and a perfect 2/2 on the penalty kill. Ben Street was one of five Rampage skaters with multi-point games, picking up 1g-2a. Joining him with multiple point games were Noreau (1g-1a), Agozzino (1g-1a), Everberg (1g-1a), and Joey Hishon (0g-2a).

The Rampage will have a week of practice at Northwoods Ice Center before traveling to Grand Rapids to take on the Griffins for a pair of games next weekend. Both games can be heard on Ticket 760 with Dan Weiss calling the action.