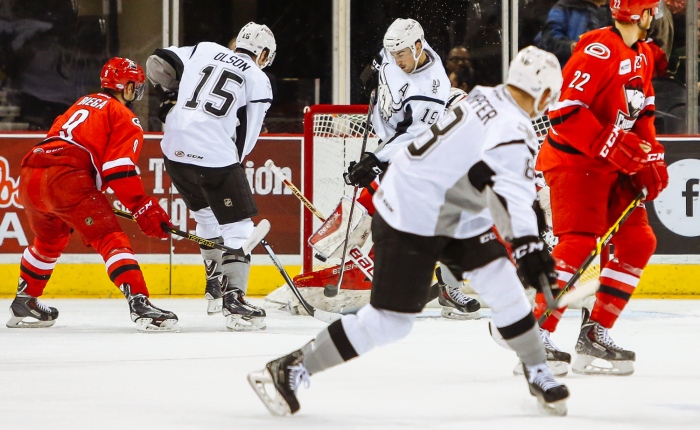 The San Antonio Rampage won 13 games within the West Division last season. Through eight weeks this season, they are 7-0 against their division rivals. Highlighted by the Dan Ellis show on Friday and stellar special teams play in the first period Saturday, the Rampage swept the weekend from the Checkers and extended their division lead to two points over the Texas Stars.

Friday night, the Rampage jumped in front after a miscommunication between Charlotte goalie Drew MacIntyre and his defense led to a turnover behind the net and an easy wraparound goal for Andrew Yogan. For the next 50 minutes or so, the night belonged to Dan Ellis. Ellis was phenomenal for a third straight game and held the Checkers to just one goal, making a handful of saves he probably had no business making. Capping off the night with two monster saves on a shorthanded 2-on-1 rush, Ellis turned aside the Checkers and Drew Shore finished the counterattack with a wrister that beat MacIntyre clean giving the Rampage the 2-1 OT win.

After being outshot for the first time this season (31-17), the feeling in the locker room postgame was that the Rampage may have stolen two points. That feeling wouldn’t be an appropriate one after Saturday’s contest.

The Rampage came out flying and put up a crooked number on the scoreboard in the first 20 minutes. Drew Shore picked up right where he left off the night before just 3:06 into the contest. After the Checkers tied the game with a shorthanded tally, the Rampage would close out the first period with power play goals–both deflections–from Garrett Wilson and Logan Shaw, their 5th and 3rd respectively. In addition to the return of the offense and power play, the Rampage also managed to kill of a 5-on-3 for 1:16 while clinging to a 2-1 lead.

After a scoreless second, Bobby Butler would pick up his team leading 7th goal of the season, beating MacIntyre under his right arm with a Bobby Butler type shot. Charlotte would fight back to get to within one, but the Rampage held on to pick up the two points and win their fourth straight contest. Bobby Butler (1-1-2), Drew Shore (1-1-2) and Mark Mancari (0-2-2) all picked up multi-point games in the contest. Michael Houser picked up the win, stopping 27 of the 30 shots he faced.

The Rampage return to action for another “School Day Game” on Tuesday morning against OKC before a huge home-an-home weekend with the rival Texas Stars next Friday and Sunday, their first meetings of the season.