I tracked 27 games for the season (26 home games plus November 7th at Cedar Park).  In those games the Rampage had a overall Corsi of 45.4% and a 45.6% Corsi Close.  During those games, the Rampage had 45.7% of the 5 on 5 Shots.  I’m pleased with how close the % of official shots and my tracked CF% are, since that indicates I’m in pretty much in line with the official scorers.  Per the AHL website the Rampage had 46.9% of Shots in all games and 47% of Shots For all games at the end of the 2nd period.  I used end of 2nd Period Shots For% since that is the best way to estimate of Corsi Close very quickly.

I estimate that the season-long Shots For% was higher than in my 27 games, mainly because most of the 12 games I didn’t track were near the end of the year when the Rampage were better and healthier.  Alternate theory: I am a jinx and the Rampage are just better when I don’t track them.  In the 12 home games that I didn’t track, the Rampage had 49.2% of the Shots For.  Another slight factor could be that the Rampage are better when the game is not being played 5 on 5. During games that I tracked, the Rampage also controlled more overall shots than 5 on 5 shots, as they had 46.9% of all shots.  Despite having a better road record, the Rampage SF% was actually better at home.  They controlled 47.6% of shots at home vs 46.2% during road games. 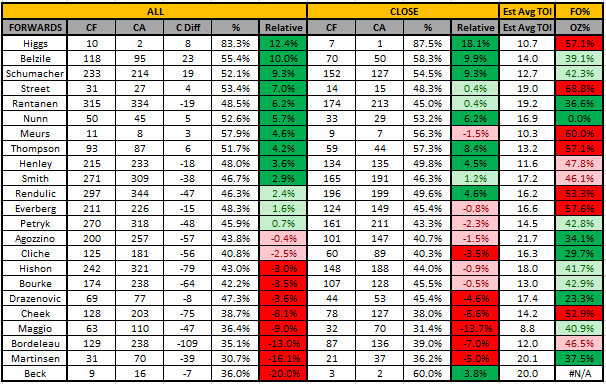 I lost my summary spreadsheet after doing the 6 reports at once. I was able to use the posted pictures from that article to figure out the accurate counts, but that didn’t include the Faceoff #s, so they are only accurate for up until 1/30 plus the 4/8 Iowa game.  This is why Beck for instance has no FO% and why Nunn has a 0% as I only have the 4/8 game for him.   Losing those game sheets also means it won’t be possible to do a Season Summary for WOWYs.  However, I will try to do Points/60 this week if work isn’t too crazy.   For the season summary, I added the Corsi Differential column.

Alex Belzile led all forwards who played over 1 tracked game in relative Corsi at a +10%, just edging out my boy Michael Schumacher at +9.3%.  Belzile’s performance part of what I believe was the biggest story towards the end of the Rampage’s season.  That story is the performance of the ECHL call-ups.  Belzile, Thompson and Nunn all came up and were valuable top 9 forwards for the last month plus.  They combined 37 points in 73 games, led by Nunn’s 14 points in 16.  For comparison, Reid Petryk had 37 points in 72 games for the season.  Adding together their totals, they combined for 261 Corsi For and 227 Corsi Against, which is 53.5%.  The combined Rampage Team Corsi in those games was 48.1% Team Corsi.  Belzile and Thompson are down in Fort Wayne for the playoffs and are dominating right now.  Belzile has 3 Goals (including the 2OT winner last night) and 3 Assists in 4 games, while Thompson has 2 Goals and 2 Assists in 4 games.  I really really really hope that the Rampage bring all 3 back for the full year next year.

This chart neatly illustrates the Rampage’s biggest problem this season – depth.  During the rash of injuries, the Rampage would consistently throw out two of Maggio, Bordeleau or Cheek as a 4th line.  The three of them combined for 385 Corsi For and 644 Corsi Against (37.4%).

Brandon Gormley was really disappointing in his time here.  Based on what Avs fans were saying when he was waived, I was really looking forward to him helping to solidify the defense, but he was really awful here as he had a Corsi Relative worse than any player who played over 1 game I tracked (I only tracked Boikov’s debut, so don’t freak out about him).

Duncan Siemens led the defense corp in Relative Corsi by a pretty huge margin and he was the only defender with a positive Corsi Differential for the season.  His influence was pretty clear in his first game back vs Grand Rapids when the Rampage did a great job of frustrating Grand Rapids and preventing any real chances for the first time in awhile.  I’m disappointed because it seems like the Avs aren’t very high on Siemens and I expect him to be traded this summer.

I want to end on a positive note, so I saved Mason Geertsen who had the 2nd best Corsi Relative among defenseman for last.  He could be mentioned along with the ECHL forward call-ups as he played 21 games in Fort Wayne and then was called up and had a huge influence on the defense corp down the stretch.  The Alberta native is currently back with Fort Wayne and had an assist in their 2OT win last night.  I’ll be very disappointed if Geertsen doesn’t have at least a top 4 role for all of next year.