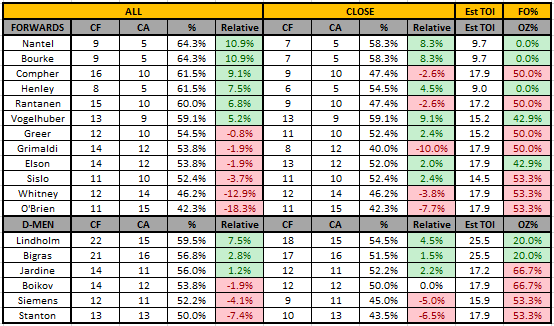 Last year, Calvin Pickard had .946 Save% for the month of October.  No wonder they were 5-0-1 when he started!

This year the team has been undone by their shooting percentage.  AHL shooting % is typically around 9.0% each year.  This is last year’s bottom half of the league (I took out Shootout and Empty Net goals):

This year’s Rampage are shooting 4.3%.  That is going to improve. Every single team has a stretch during a season where they run into 4 hot goalies in a row.  This is that stretch for the Rampage.  Even if you think that all of their forwards are garbage (they aren’t), their shooting % should still nearly double.  Every game has been a one goal game (or two with an ENG), so just a tiny shooting% improvement makes them at least 2-2.

The one thing that does concern me so far is that the 1st line (Whitney-O’Brien-Sislo) and top defense pair (Bigras-Lindholm) have both been really awful.  However, that can also be spun as a positive: “Their top players have been awful.  The team seems super disjointed at times.  They still have been over 50% in possession.”

(This 4th line is amazing)