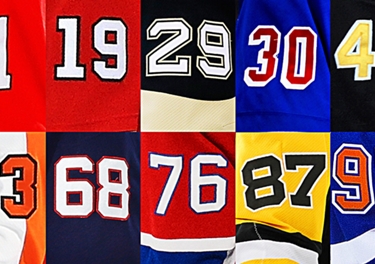 For professional athletes, the logic behind the number they wear can run a wide spectrum of reasons. It can range from being the year a player is born, to acting as a tribute to a favorite athlete as a youngster, or simply getting that number as a rookie and sticking with it.

For yours truly, I have two numbers that have a deep meaning to me personally.

First, when I started getting involved in sports where I could actually choose a number–before this I was just happy to be on the team so I took what was available–the UNLV basketball team had all graduated to the NBA. Stacey Augmon was my favorite athlete that wasn’t a Wolverine, a Piston, or a Red Wing, and the big three of Augmon, Larry Johnson, and Greg Anthony all wore the #2 as pros. This is the first time I remember the number having a special meaning to me, but it has stuck with my for 30 years now.

The second number was given to me as a young airman fresh out of technical training by my squadron First Sergeant and Intramural Softball coach. As my first true mentor in the USAF, I can still remember him coaching third or hollering words of encouragement from the dugout.

When I arrived to San Antonio and started attending games, the Rampage had a big stay-at-home defenseman who not only wore #55, but also shared a name with my 3 year old son. Logan Stephenson’s game worn jersey was the first (of many) I would buy over the next four seasons.

For Rampage forward Nathan Walker it was simply a matter of what he’s had since he entered professional hockey.

Ryan Olsen’s number is a tribute to a Hall Of Fame “Mighty Duck”.

Mike Vecchione couldn’t get his favorite number, so he used that as an opportunity to pay tribute to his dad.

Speaking of the #58, I was also able to chat with Nolan Stevens about his offseason switch to more of a “hockey number”.

There is no single recipe for number selection. Some come with stories, some don’t. Some players are passionate about their numbers, while many are indifferent. One thing you can count on, seniority will always play a role inside a locker room when it comes to numbers. Jake Dotchin is holding on to a popular number, but as long as he’s on the roster, the younger guys are going to have to wait to fight it out for his 21.

Huge stick taps to Brian McCormack for the assist on the audio.