“Ranking the Rampage” makes its return today to rank the top Left Wings in franchise history, and we’ve got some good ones, folks. Included in today’s list are a couple of franchise greats, an old timer that many may have long forgotten, a hired gun who turned into a great scorer, and a hot shot prospect who turned into an NHL fixture.

This exercise is proving to be even more difficult than I initially imagined. There are some fine individual seasons, but again, for skaters, longevity is rewarded. One statistic I have added is points per game. In at least one case, this statistic made the difference in where a player ranked.

Enough jibber jabber, let’s get to it!

Acquired at the 2010 trade deadline from the Columbus Blue Jackets, Picard wasted no time making his impact. In the final 16 games of the 2010 season, the power forward put up 15 points, including 9 goals. The following season, Picard put up solid numbers despite battling injury for a good chunk of the season. His hustle and hard work, along with his nose for the net made him a fan favorite in his short stint in the silver & black. After leaving the Rampage following the 2011 season, Picard played one more season in the AHL before heading off to Europe where he has been playing since, most recently in the KHL.

After spending his rookie season with the Phoenix Coyotes, everyone–including Boedker–was surprised when he was assigned to the Rampage to start his sophomore campaign. After some rough moments early on, Boedker settled in as one of the most dangerous skaters of the Coyotes/Rampage era. In his season and a half in San Antonio, Boedker electrified fans with his skating and overall skill level. He has gone on to have a solid, albeit unspectacular NHL career, scoring 288 points in 618 games.

Predating my time in San Antonio, the Panthers prospect performed at exactly a point per game pace over his first 79 games, scoring 34 goals and adding 45 assists, while shuttling back and forth between San Antonio and South Florida. His third season with the Rampage saw him struggle to produce eventually leading to his trade to the Edmonton Roadrunners after just 32 games in 2005. That season would be his last in North America. However, Beaudoin did go on to play ten more seasons in various leagues throughout Europe. 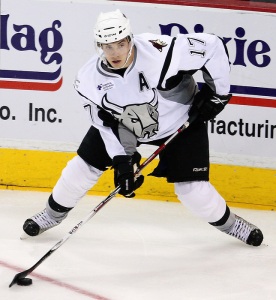 Spina was a small and agile winger who made fans scoot to the edge of their seats every time he got the puck in space. Fast, agile, and passionate, he was easily one of the most beloved Rampage players of his era. Somewhat of a minor league journeyman before joining the Rampage, Spina put up 50 points or more in his two full seasons. His third season was riddled with injuries and he only saw action in 26 games in 2009-10. After leaving the Rampage, Spina played one more season in the AHL with Peoria before, like many career minor leaguers, taking his skill to Europe where he played until his retirement in 2017.

When you look at the all-time leaderboard for the Rampage, Brett MacLean is the one constant. MacLean is the all-time franchise record holder in goals, assists, and points and checks in at third in games played behind only Sean Sullivan and Greg Rallo. The former Coyotes second rounder was a shoe-in for 20 goals and 30 assists every season. His best season came in 2009-10, where MacLean registered 30 goals and 35 assists, putting him second on the all time leaderboard for points in a season (65). After moving on from Phoenix and San Antonio, MacLean signed with the Winnipeg organization. After one season with Manitoba and a cup of coffee with the Jets, MacLean tragically suffered a severe cardiac emergency while playing in a summer pick up game and was forced to retire at just 24 years old.

There we have it. Your top 5 Left Wings of all time. Comments? Complaints? Kudos? Be sure to leave them in the comments or hit us up on social media.