Hockey playing time is typically distributed by line number.  First liners will almost always play more than 2nd liners who play more than 3rd, who play more than 4th. First Liners also get Power Play opportunities, therefore, even if a 1st liner isn’t the most talented player, he will typically have more total points just due to playing time and PP opportunities.  One way to equalize this and more accurately compare players is to compare them by time played and 5on5 points only.  This is typically done by comparing points per 60 minutes of 5 on 5 played.

I reviewed every Rampage game for this season, counting every 5on5 Goal, 5on5 primary assist, 5on5 secondary assist and also calculated how much of the game was spent at 5 on 5 (related I probably need a girlfriend).

I tried mimicking behind the net’s point/60 chart (links below).  Since secondary assists are more luck than skill, I also did a separate primary point/60 chart. 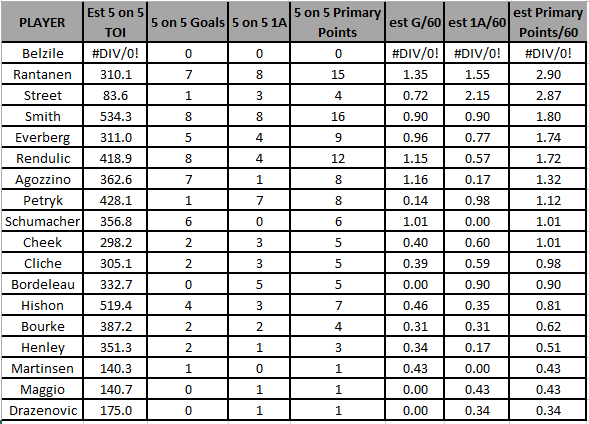 Belzile’s numbers are all undefined because I haven’t seen him play, therefore I can’t estimate his TOI.  Meurs has 0 points, so I just deleted his row.

Gormley has only played 3 games, so his Karlssonesque number is not meaningful.  Zadorov and Bigras were comparable to Victor Hedman (currently 5th in the NHL), so they will be missed.  Siemens’s points/60 explain why he’s constantly being passed over by the Avs despite being the most solid defenseman here.  His NHL comparable is Niklas Kronwall (#171).